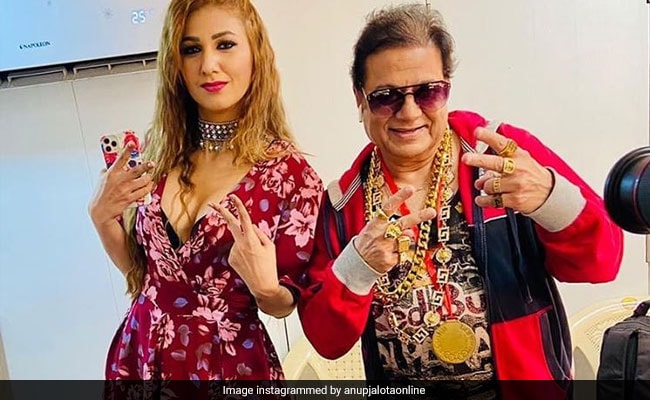 Singer Anup Jalota, who is best-known for singing devotional songs, recently shifted to rap. On Tuesday, the 67-year-old singer shared a few pictures from the sets of his forthcoming film Woh Meri Student Hai along with his co-star Jasleen Matharu. In his caption, Anup Jalota wrote: “Wrapped up the shoot of my upcoming film Woh Meri Student Hai with a rap song. Now get ready to dance with me. Releasing soon.” Sharing the same pictures on her Instagram profile, Jasleen wrote in her caption: “Eyeliner wali aakhan mein tere utte rakhan. Wrapped up the shoot with a rap song.”

Over the weekend, the duo featured on the list of trends after a photograph of them, dressed as a married couple, surfaced on social media. The pictures sparked wedding rumours. However, the picture is said to be a promotional activity for their forthcoming film Woh Meri Student Hai. ICYMI, this is the post we are referring to:

For the uninitiated, the former Bigg Boss contestants appeared on the show in the same season in 2018 and Jasleen called herself Anup Jalota’s girlfriend during the initial episodes of Bigg Boss 12. However, towards the end of the show, they revealed that they were joking and that they only share a teacher-student relationship. They also clarified that their relationship on the show was just a prank.

Jasleen Matharu is reportedly said to be dating a cosmetic surgeon named Abhinit Gupta. In a recent interview with India Today, she also revealed that it was singer Anup Jalota who introduced Abhinit to her.