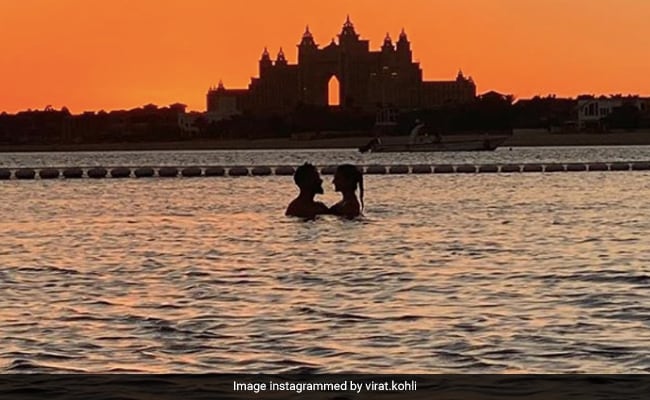 Virat Kohli is in Dubai for the ongoing Indian Premier League and accompanying him is his wife, actress Anushka Sharma, who is expecting. On Sunday, Virat Kohli shared a glimpse of his pool time with Anushka Sharma on Instagram and assigned photo courtesy to his fellow Royal Challengers Bangalore teammate AB de Villiers. Virat simply captioned the photo with the red heart icon and sunset icons. AB de Villiers was one of the celebs who left a comment on the photo. Perfect – he said in sign language and his comment got liked over 51,000 times. The loved up photo is indeed a perfect one as it captures a magical moment between Anushka and Virat with the Dubai sunset painting the sky in shades of orange.

Anushka and Virat announced their pregnancy in August, with the cutest statement ever: “And then, we were three! Arriving Jan 2021.” During the previous IPL matches, Anushka was spotted cheering for Virat from the stands.

Meanwhile, Anushka has been sharing these photos from her Dubai diaries. Her pregnancy glow is unmissable:

In terms of work, last seen in 2018 movie Zero, Anushka Sharma produced two web shows this year – Pataal Lok from Prime Videos and Bulbbul for Netflix. Meanwhile, Virat Kohli on Friday, led Royal Challengers Bangalore to yet another victory as they beat Rajasthan Royals by seven wickets. Royal Challengers Bangalore’s next IPL match is scheduled for October 21, when they will play against Kolkata Knight Riders.